Film Review of Secret Diary of a Call Girl 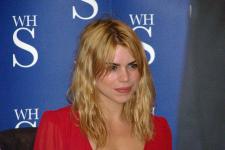 This is a film which involve sex industry. Sometimes I think I would rather to catch a triply to watch than to sleep with a dull man, Because each set is very short, it probably still can give you the climax, even it is a neuter version. I still remembered that I really did't think Belle is a beautiful woman when I watched season one. But I have been able to appreciate her beauty to season four.
I like to watch her to receive each customer in high spirit. She let me become more believe that there is some people really like to be a prostitute as career. From her, I felt a little shamed, I just in labor, I didn't work hard.but she does't.

Ben and Han is alike,both are brave,Both have the courage to make a choice, choose what they want, rather than they should.From the start, Ben appeared in Han's world, his state cannot be removed. From season one Ben delayed he and Vanessa' s wedding ceremony, at that moment, I knew he was really love Han.real love. But they finally broke up. Ben wants a family,but Hannah cannot give. just because she know she cannot give,she choose to leave. Hannah just wants to be herself.They separate,not because they don't love each other, they are too love.they love, but cannot give each other they want. So they say goodbye. Losing Ben, it means, Hannah and bell lose everything, but she finally decide so. love, like on you.

In fact, I know they will not be together at last, but I still hoping. Finally I having no choice but to Give up the lens. Sometimes. Two people who love each other deeply always can not be together. That's it. If it's you. Would you do as Hannah. Choose to leave because love too much. When you can't give your lover what he needs. When you can't let him be happiness. choose to leave is more great than to possess him.